Achitex Minerva Group produces and distributes products for both continuous and discontinuous printing of textiles (screen and digital printing).

The constantly updated and expanded wide range offers Customers versatile products which can be used for printing upholstery and furnishing fabrics and garments, with excellent quality results.

Most Achitex Minerva printing products are on the Inditex list and hold GOTS, bluesign® and ZDHC certifications.

The range can be modified in response to the demands of the market and our Customers, without any reduction in quality.

Minerprint® Pure inks are pigment dispersions in a phthalate-free plasticizer and PVC-free resins. They are ready-to-use inks, perfectly homogeneous.

They differ from the Plast range for the absence of PVC in the formula: this feature makes them really eco-friendly. They meet the strictest textile standards.

Like the inks of the Plast range, they are tissotropic allowing to obtain precision in details, high coverage and uniformity of printing.

The range consists of:
•   13 base colours that can be mixed to obtain other tones
•   6 fluorescent colours
•   5 concentrated inks for four-colour printing (PK series)
•   3 plast inks for metallic effects
•   white inks and bases

Ecological profile: the Minerprint® Pure range is an excellent alternative to plastisol inks, responding to the ecological demands of the market in search of high performance products that at the same time allow to protect the environment.

Innovative formulation: the Minerprint® Pure range combines the performance of traditional plastisol inks with the ecological advantages of water-based ranges.

Stability over time: the Minerprint® Pure range does not present stability problems over time, neither during transport nor storage. Stored as indicated in the specific data sheets, they have a shelf-life of more than one year.

Stability in the frame: the Minerprint® Pure range does not dry in switchboards, does not lock them, allowing a significant reduction in machine cleaning times and a reduction in product waste, as well as production costs. This allows high production speeds to be maintained.

With "Colour Matching System" MinerMix Minerprint® PURE is possible to obtain Coated formulations, in a fast, easy and reproducible way! 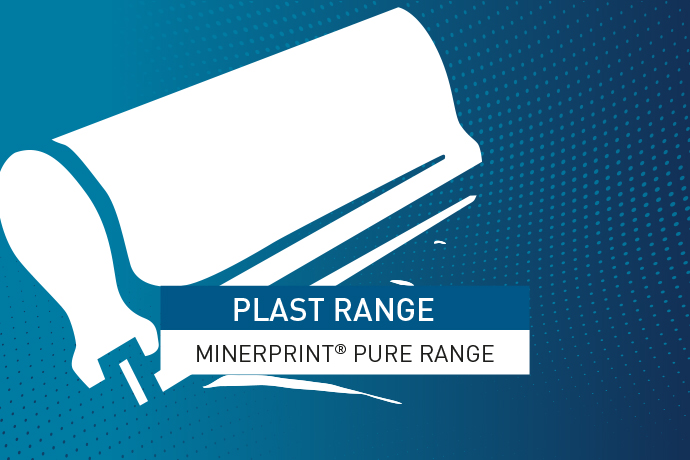